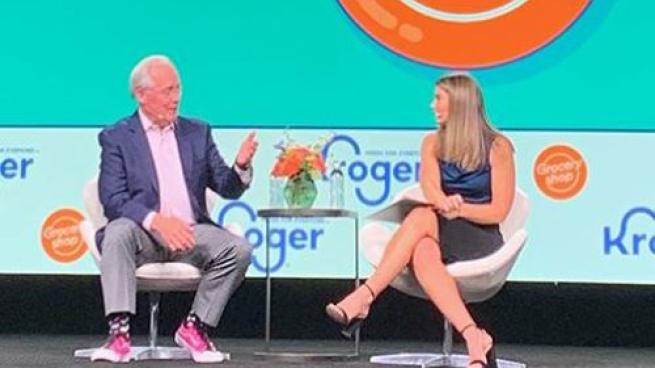 Digital efforts pay off as grocer retains consumers within its ecosystem

As consumer behavior shifts with each COVID wave, The Kroger Co. is seeing its digital efforts pay off as the grocer retains shoppers within its ecosystem.

Rodney McMullen, chairman and CEO of Kroger, expressed excitement for the future of grocery e-commerce at the Groceryshop trade show in Las Vegas on Sept. 19, noting that the pandemic accelerated about three years’ worth of transition in two weeks.

While some digital shopping has decreased, he described it as not being much, with this most recent Delta surge causing some shoppers who had been returning into stores to flip back online.

What’s more, almost every customer that was shopping with Kroger digitally moved to shopping with it in-store, said McMullen. “So we didn’t lose them out of our ecosystems. They just went back to the store versus online.”

For Kroger, this seamless migration is the critical part of serving its customers. “We want to have a customer that when you think food, you think Kroger,” noted McMullen. “And when you tie all of it together, it makes it easy. … We’ve always had the theory of it, but it was the first time we had a true data point that the customer really did switch from one to the other in a totally seamless way.”

As Kroger strives to reach $20 billion in digital sales by 2023, the grocer’s automated Customer Fulfillment Centers, the first of which opened earlier this year, are expected to play a significant role in enabling the company to enter new markets.

It’s also testing its Hometown grocery pickup services in towns that don’t have a grocery store.

“Usually dollar stores are your biggest competitors in those kinds of markets,” McMullen said, “but it really is trying to be wherever the customer is.”

Looking at the rapid growth of retail media network, Kroger is taking steps to ensure it stays ahead of the curve. The company was an early entrant to the market, which has become increasingly saturated.

McMullen noted that the Kroger has 11 million people entering its stores and 4 million people visiting it online; while this presents many monetization opportunities for retail media networks, the company is taking a longer-term view in order to ensure it still provides value for its CPG partners.

“We’re not going to advertise Coke to Pepsi customer, and vice versa, because that doesn’t do us any good,” he said. “I’m sure we can get revenue from it, but we’re really trying to figure out a way where all boats rise.”

Cincinnati-based Kroger, which employs nearly half a million associates who serve 11 million-plus customers daily through a digital shopping experience and almost 2,800 retail food stores under a variety of banner names. The company is No. 3 on The PG 100, Progressive Grocer’s 2021 list of the top food and consumables retailers in North America.

Progressive Grocer Member since November 30, 2020
Loading + Follow Following
Progressive Grocer has been leading the U.S. grocery industry since 1922. Its signature editorial approach of providing balanced perspectives in every story makes it the most trusted resource in retail business media. And with unique access to detailed data and insights from Nielsen, IRI, Mintel, McLane, and DTN, along with proprietary in-house research, Progressive Grocer is the industry's foremost source for industry trends, consumer trends, data, and insights. https://progressivegrocer.com/
Do you like Progressive Grocer's articles? Follow on social!

People reacted to this story.

Before the Butcher Mainstream Plant-Based Burger

The Importance of Retailer-Supplier Collaboration in Grocery and Drug

Body tasked with providing input into distribution and allocation of shots View Original Article Operations & Supply Chain Progressive Grocer Member since November 30, 2020 Loading + Follow Following Progressive Grocer has been leading the U.S. grocery industry since 1922. Its signature editorial approach of providing balanced perspectives in every story makes it the most […]

A Look at Today’s Seafood Consumers

Today’s shoppers are in it for the long haul when it comes to seafood. Not only are they choosing seafood over other proteins more often, they want to eat more of it and are eager to discover new recipes. View Original Article Dept. Fresh Consumers Shoppers Progressive Grocer Member since November 30, 2020 Loading + […]

While the COVID-19 pandemic has skyrocketed the growth of online shopping, there is still a large segment of the population that wants to venture away from their computer screens and have in-store experiences. According to Raydiant’s second annual State of Consumer Behavior Report, 46%of respondents said that given the choice, they prefer to shop in person rather than online. […]